As some of you already know, I'm currently interviewing artists, activists and mostly, both. This week I'm posting an interview with the poet Lydia Havens (Twitter: @lizardhavens / Instagram: @lizardhavens). You can get their full-length collection, Survive Like the Water, here! 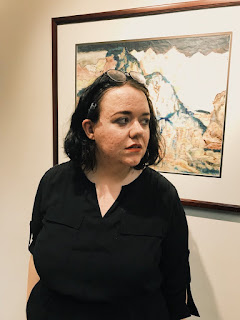 I'll also post the interview in Spanish so you can all read it in both languages. I'm not a professional translator, but I tried my best!

1. My favourite poetry line of yours says: "Men call me sexy the same way they tell me when my nose is bleeding". This makes me think a lot about misogyny, (hyper)sexualization & dehumanization. Which is, to you, the core of the issue of the way men treat women in a patriarchal world? Which is to you the key to building relationships, both sexual & romantic, in which compassion & respect are the key instead of violence & power?

In my personal experience (this is not to say this is the case for everybody), the biggest issue has been all the ways I can be undermined by men. My skills and abilities are often undermined by men when it comes to my work. My experiences and emotions are under often undermined by men when it comes to my being a trauma survivor (and when it comes to my just being a younger femme-identifying and presenting person). This can be annoying and infuriating if I'm lucky, and outright dangerous if I'm not. I've been threatened for being overly ambitious, and I've been threatened for being overly emotional. So, perhaps my biggest issue has actually been that no matter how I present myself, I usually do not feel safe. I think compassion is usually the "easy" solution—many men in my life did not or still do not associate compassion with masculinity or "being a man", which I think is a great contributor to misogyny.


2. Which influences, which issues have shaped your approach to both feminism & womanhood?


I actually recently came out and started publicly identifying as non-binary, so I don't think I can really talk about what womanhood has come to mean to me. But my biggest influences in my feminism and my femme-ness are the women who raised me, and my community. My mother raised my sister and me completely on her own for about 5 years, all while working full-time as a public defender. My grandmother was an English professor for 40 years, and now volunteers her time as a mentor for children in foster care. I've grown up on stories about all that they've overcome, both in the workplace and their personal lives. Right now I work as the Communications & Events Manager for a literary non-profit that is run mostly by women and non-binary folx. Before that, I worked for another literary non-profit that did a lot of incredibly necessary activism work, whether or not it had to do with poetry. It's been that kind of work that's influenced me the most as a feminist and an activist, and the people behind them. If it's ok, I want to name a few names: Sarah Gonzales, Teré Fowler-Chapman, Tara Lzicar, Cheryl Maddalena, Kate Lange.


I think my feminism is directly linked to my identity: I'm a mentally ill, queer trauma survivor, and that's definitely influenced me, but so have the more privileged parts of my identity. I'm white, I'm able-bodied, I've fluctuated between class standings a couple times in my life, and even though I'm non-binary, a majority of the time I still publicly "pass" as a cis woman. I don't want to just fight for the rights of people who look like me—I want to fight for the rights of everybody who still needs rights.

3. In your poem "Girl is the Warmest Color", we encounter the line: "two girls kissing in Paris, ignoring the politics in this". This makes me think of wether we can find some balance between admessing that all art is political & we musn't pretend otherwise, & finding a place of comfort where we can just exist without fighting any more than we already do just by existing. What are your thoughts on this? Is it possible to achieve this balance?

With that line in particular, I wasn't really thinking about how art can be political—I was thinking about how just existing can be seen as political. I remember after the Pulse shooting in Orlando, I was talking to someone I knew from my childhood about the action I believed they could take as a white cis straight person, and they replied, I just hate politics. I don't want to get involved in anything messier than my own life. That response was of course infuriating, but also sort of fascinating to me. As a queer person I've never thought of this as politics; I've always thought of it as my livelihood, and the livelihood of other folx in the LGBT+ community (and in the case of the Pulse shooting, it was about the livelihood of LGBT+ folx of color).


So while LGBT+ rights are almost always directly linked to politics, I feel like my existence as a non-straight, non-cis person doesn't always have to be political. Most of the time, I'm literally just existing.


4. How did you realize you weren't straight? What would you tell a younger folk who realizes the same thing, who feels alone, isolated...? How would you try to give them some hope, support, & even some will to fight this heteronormative world?

I realized I wasn't straight at a fairly early age—around 12 or so. I grew up around a few relatives and family friends who aren't straight, and were wonderful enough to take the time to answer a lot of questions I had about my own sexuality. I identified as 100% gay for quite a while, but realized about a year and a half ago that that wasn't necessarily true for me, so I've identified as bisexual since then. Coming out at such an early age while going to a pretty conservative middle school was not... the most pleasant experience. I faced a lot of really violent homophobia (which I won't get into here), but now I'm at a place in my life where I can, for the most part, be who I am without fear. That's a huge privilege I try not to take for granted.


What I would tell younger folk who are facing similar struggles is: you do not owe anybody an explanation about who you are, and who you love, especially if that explanation puts you in danger. Don't feel obligated to come out, and remember you don't have to come out to everybody in your life. You will find ways to love who you are that are quiet and discreet, and those ways matter just as much as the loud and proud ones. You matter, and nobody can take that away from you. Hold onto your LGBT+ heroes, but find a hero in yourself, too.

5. One of my favourite quotes ever, by Dunya Mikhail, says: "I still feel that poetry is not medicine - it's an X-ray. It helps you see the wound & understand it." What does poetry mean to you, how does it help you keep breathing, stay alive in such a harsh, cruel world?

I actually just finished a project for a class that talks about exactly this! I started writing poetry at a time in my life that was incredibly dark and full of tragedy, as a means to try and understand those tragedies. Writing very quickly became a means to survive for me, too, and a way for me to feel heard. I've always had a voice, but poetry taught me how to use that voice. So now, as an adult, I've come to realize that I don't think I could survive without writing (or I could, but it'd just be absolutely miserable for me). Poetry is connected to so many of the good things present in my current life: I met all my best friends through poetry. When people ask my parents what their oldest child does, they say "She's a poet" with pride. I've found my greatest joys through poetry, and looking back, I'm honestly not sure if I'd still be alive if I hadn't started writing and performing poetry with such feverishness. Poetry found me when I absolutely needed it to, and it's helped me survive, but also live, ever since.

6. Finally, how does it feel to write poetry at this time, in a world fully dominated by men writers but that, at the same time, is witnessing the birthing of so much poetry written by marginalized women & women-aligned folks?

Haha, sometimes it can be a little frustrating if I'm being honest. There have been so many moments when men have been given credit for my successes as a poet (fellow poets who happen to be men, a few teachers/mentors—even my dad at some point, and my dad's not a writer of any sort), or I've worked on projects with male poets where they've ended up getting most of the credit and glory. But I've also been lucky enough to become a part of a really wonderful community of women/gender nonconforming/non-binary/femme poets, and even though a lot of the time we're just bonding over our frustrations and exhaustions about this shared struggle, I think we're doing really incredible work regardless. Some of the most spectacular poets I know aren't men, and they all happen to be some of the most underrated poets I know, too.

If it's ok, I'd like to end this conversation with a list of women/GNC/NB/femme poets I really adore (which is totally abridged, and if I could I'd just spend the next day naming names): Dorothy McGinnis, Linette Reeman, Alexa Lemoine, Faith Culhane, JohnQ, Sara Mae, Jess Rizkallah, Talicha Johnson, Taylor Steele, Cecily Schuler, and Evander Meraki.
Publicado por Sol en 14:43